It's Superbowl Sunday...dip the hell out of me!!

A friend of mine came up with a great idea (Stan Russo you're so savvy) that he incorporated into a little get together at his place over the summer...a dip contest! Everyone had to bring a homemade dip that would be rated first by the flavor and second by the name.  It is engaging, brings on a lot of laughs (some of the names were hilarious and at times downright offensive lol) and some of the dips were very creative! This can be an awesome way to spice up the upcoming Superbowl festivities!  Which is really important cause the NY Giants are going to kick some major ass this Sunday! 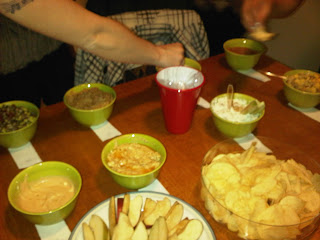 Have each guest write the name of their dip on a small piece of paper and tape it to the bottom of their bowl.  Number each bowl. Now get to dipping and let the games begin!!!

Once everybody has tasted all of the dips,  place an empty bowl on the table and have each guest write the name of their favorite dip on a piece of paper (you can't vote for your own), placing it into the bowl.  Have the guests gather around the table as the host of the party announces the nominees and finally...the winner!


Hit me up if you would like to see the full recipes for any of the above!